On January 24, 1950 a photograph was taken that would change the world.

“The light struck the lens of the camera. The supernatural being was there” said George J. Lacy, Examiner of Questionable Documents – U.S. Federal Bureau of Investigations. Throughout history, this is the first time that a supernatural being has been scientifically proven to be present. What was that supernatural Light? Who or what was at the platform with the prophet that evening in Houston, Texas?

It was a night that was shrouded in controversy at the Sam Houston Coliseum. Brother Branham was leading a healing revival that was sweeping the land. The blessings of the Lord Jesus were pouring out like rain upon the spiritual fields of wheat. But the great signs and wonders did not come without criticism. Like always, the enemy raised up an adversary. The two forces met in Houston Texas, and the Lord Jesus Himself came down to fight the battle. 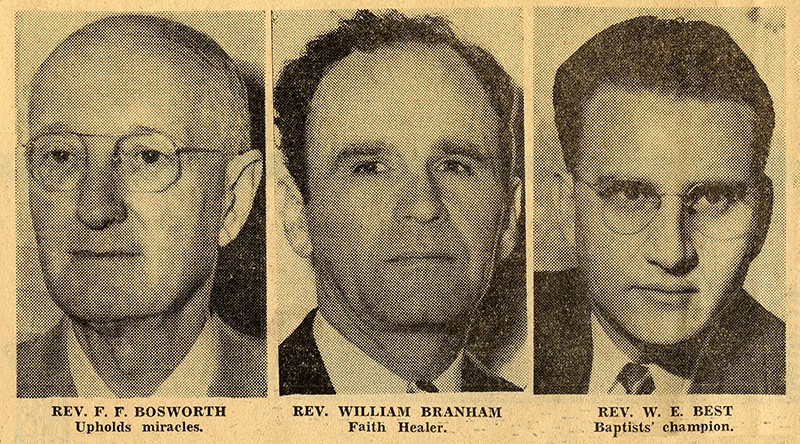 Thousands were already present to witness the countless miracles that followed this man of God. On January 23, a group of skeptical ministers, championed by one local Baptist minister – a vocal critic of divine healing, challenged the prophet to a debate over divine healing.

Brother Branham respectfully declined the challenge, trying to prevent the enemy from making this a public display of discord among Christians. The loyal Reverend F.F. Bosworth, ever at Brother Branham’s side, took up arms and waited for his general’s order to go to battle. Initially Brother Branham held his devoted soldier back, but after prayer, allowed Brother Bosworth to meet the challenge of Reverend Best in front of the masses that would be present. Brother Branham set one condition: “Promise me that you won’t argue.” Brother Bosworth then told the newspaper that “the challenge is welcome and accepted.” The next morning, the papers read: “The theological fur will fly at 7 p.m. today in the Sam Houston Coliseum.”

The skeptic hired a professional photographer, Ted Kipperman of Douglas Studios, to document the debate. That evening, the photos were taken with Brother Bosworth standing modestly, as the skeptic posed in intimidating positions; one time with his finger thrust into the humble old man’s face.

The next evening in the Houston Coliseum, when the battle was to begin, Brother Branham, accompanied by Sister Branham, Sister Rebekah, and his brother Howard, chose a seat high above the crowd in the balcony to witness the debate.

Brother Bosworth took the stage and asked the skeptic one, and only one, simple question about divine healing: Were the redemptive names of Jehovah applied to Jesus, yes or no? The skeptic was had. If he answered yes, then Jesus is the healer because the redemptive name Jehovah-rapha is “Jehovah Healer.” If he answered no, then he denied that He was Jehovah-jireh; “God’s provided Sacrifice.” Brother Bosworth invited Reverend Best to the platform to answer this simple question.

The minister refused the invitation, which led Brother Bosworth to ask the crowd for all that had been healed of their infirmities to rise. Thousands stood to their feet. After those that were healed took their seats, he asked if all those healed by divine healing that were members in good standing of this man’s denomination would stand. Three hundred rose to proudly display the mercy that Lord Jesus had shown them.

The prophet, filled with the Holy Ghost, gave the following response:

But I can’t heal no one. This I do say. When I was a baby born up in the state of Kentucky, according to my own dear mother, and which has been vindicated through my life, there was a Light came in the room of that little old huddle there, where it was at, no floor in it, didn’t even have a window, they just had a little old thing for a window there, like a little door, and they pushed it open about five o’clock in the morning, and this Light circled in just as it was breaking day. Since that time, It’s been with me. It’s an Angel of God. He met me in person a few years ago. Down through my life, He told me things that’s happened, and I have told them just as He told me. And I challenge anybody at any place, to go to the city where I was raised, or anywhere else, that a statement has ever been made in the Name of the Lord, but what come just exactly the way it said it would.

After the prophet said those words, the Holy Spirit fell upon the platform, and the excited photographer snapped a picture. Brother Branham left the platform with the simple, yet prophetic statement: “God will testify. I shall say no more.”

“God will testify. I shall say no more.”

Mr. Kipperman’s associate quickly went to work developing the photographs for the next morning’s news. He noticed something odd as he drew the first photograph from the developing solution. It, like the next five photographs, was blank. He grabbed his heart and fell forward when he pulled the last print from the solution. There, on that last photograph, was the Pillar of Fire in a visible form resting over the head of God’s prophet, William Marrion Branham. 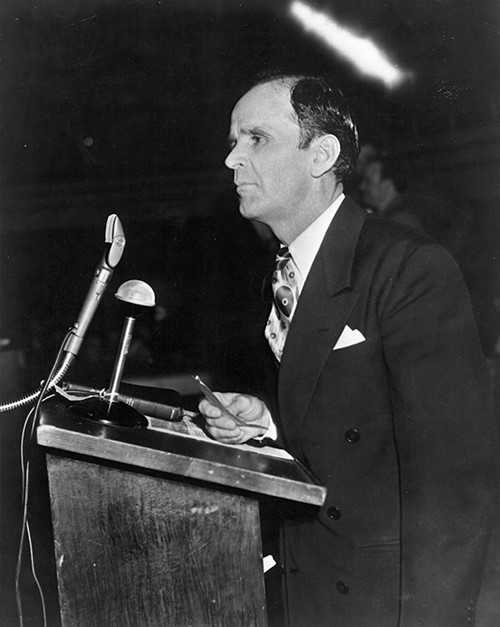 The photograph was quickly turned over to George J. Lacy, Examiner of Questionable Documents often hired by the United States F.B.I. He examined the picture, as well as the auditorium where it was taken, and authenticated the picture with his expert opinion. 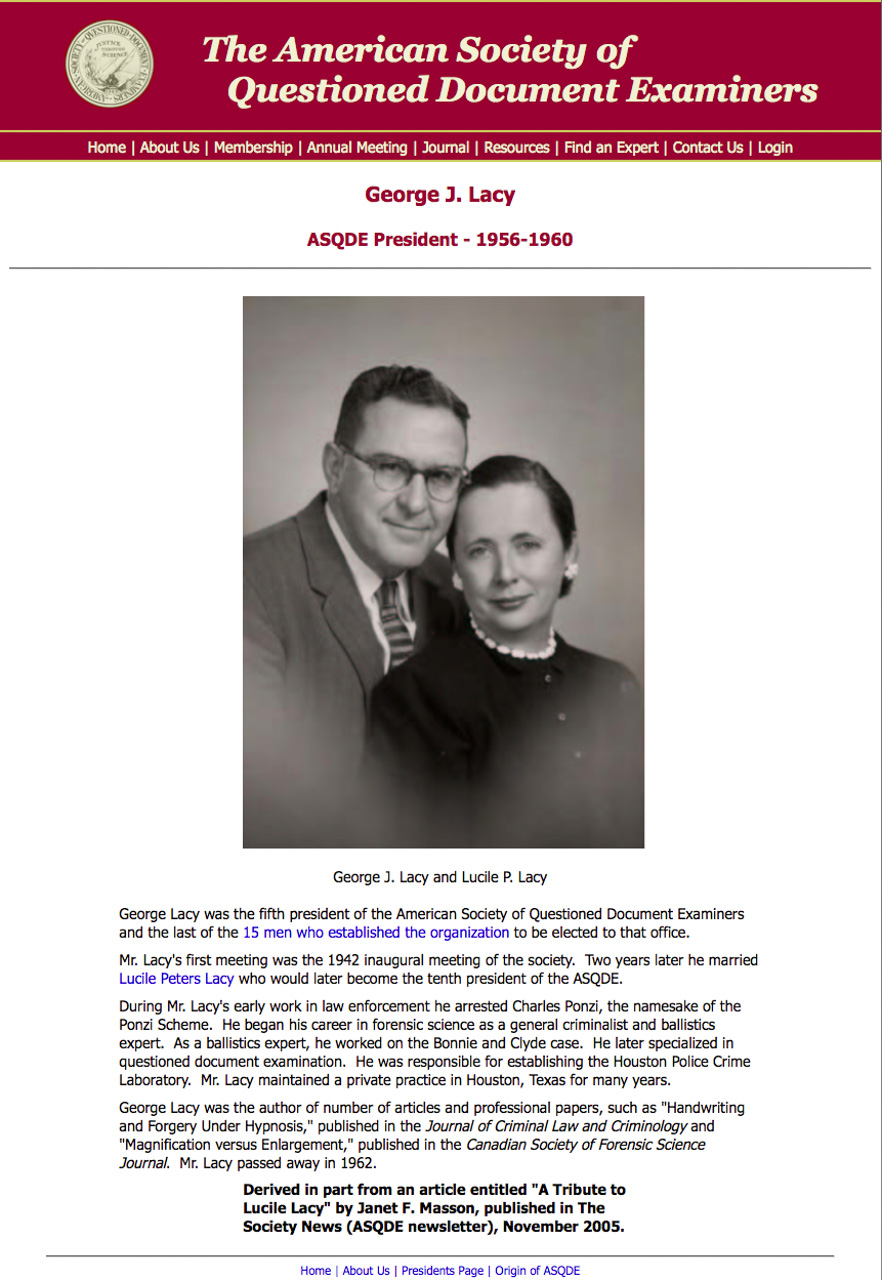 Science, in all its worldly wisdom, was forced to admit that this was actual evidence of a supernatural being. Man has throughout the ages tried to explain God. Through science, he has always tried to heal himself with modern medicine. He has tried to make a modern Eden with great cities and luxurious surroundings. He has even tried to discover the secret of life. Each time, he has denounced the God that created him. But what was this Being on the platform with the prophet? What was this Light that was scientifically proven to exist? The world may never know or care to know, but it is something very special to the Bride of Christ.