This Sunday will mark the fourth blood moon in the 18-month tetrad of lunar eclipses. Although a tetrad is rare, it has happened many times in history. However, these four blood moons fall exactly upon Jewish feast days. This has happened only eight times since Christ:

Eight occurrences in 2,000 years is rare by anyone’s standards, but this recent tetrad is unprecedented. The parallels between the Catholic Church, Israel, United States, and the blood moons are simply extraordinary.

Here is what the prophet said:

Remember, this is the seventh church age, the Laodicean Church Age. According to Revelation 3, they reject Christ. Of every church age that was mentioned in the Bible, the Laodicea Age was worst of all of them. It turned Him out, rejected Him, put Him on the outside.

Did you see the moon black out, the other night, before the pope went over to Rome, from Rome to Jerusalem? Jerusalem, the oldest church; the moon is a type of the church, always reflecting the light of the sun, in the absence of the sun, and it blacked out. I drawed that on a blackboard here, three or four years ago, and showed the churches, in hundreds and thousands of homes across the nation. What was it? A shadow. The first time a pope ever left, to come back here, come in—in the name of Paul, and so forth, went down through those places; had to bless the river, to cross it, and so forth. What does the—the river need blessing?

Watch the great ecumenical move, is going into this council up there now, just forming an image of the beast, in Revelation 17, exactly what it said it would do. You Pentecostal people going to sit still for that and go into it? The forcing hour has come.

Now is the time to rise and trim your lamp, and shine with the Gospel of Jesus Christ and the Power.

When we published the first article on the tetrad of blood moons in April 2014, we pointed out that almost exactly 50 years earlier, the pope traveled to Jerusalem and there was a total eclipse of the moon. Brother Branham also often typed the United States to Israel:

And how that this country, being a type, like Israel, come into a land and drove out the occupants, and inherited the land. And the first few kings they had, David and Solomon, were God-fearing kings. After a while, they got an Ahab on the scene. They voted him in. The chair’ll got…church got worldly. And, we’ve had a Lincoln and a Washington, look what it is today. Look where we’re going now. Where is the next thing? We’re at the end time.
64-0321E The Voice Of The Sign

The first of the four blood moons (total lunar eclipses) happened when the pope went to Jerusalem in 2014. The upcoming fourth blood moon will begin precisely, almost to the minute, as he leaves the United States. To top it off, this will be far and away the most impressive eclipse we’ve seen so far, because it is what is called a “super moon.” It will seem 14% larger and 30% brighter than normal because the moon is at its closest rotation to the earth.

This lunar eclipse also comes at the end of what is called a Shemitah cycle, a seven-year period leading to God’s commandment in the Old Testament for resting the land from crops and release of debts in Israel. It’s tough to pin this down to a specific year, but many Jewish scholars say that we are also in the 50-year Jubilee. Ironically, the pope declared a year of Jubilee to start on December 8. One thing we can say for sure, is that the Bride is already having a Jubilee!

All this is just the tip of the iceberg. There are far too many things to list about the significance of the times we are living, but here are a few facts to think about during this last blood moon. 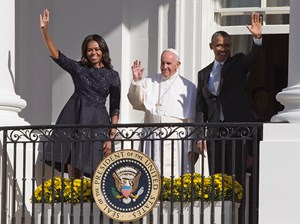 Are these simply coincidences, or is the Lord trying to show us something? We already know the hour is late, but this should always be on our minds:

God sent a prophet with the ministry of Elijah, to turn the hearts of the children back to the faith of the Pentecostal fathers. This ministry foreruns the Second Coming of Christ. Small groups of people in every nation on earth have accepted this ministry, and their faith is increasing every day by hearing the Voice of God. They will surely have their garments white, oil in their lamps, and be ready for His Second Coming.

10 But the day of the Lord will come as a thief in the night; in the which the heavens shall pass away with a great noise, and the elements shall melt with fervent heat, the earth also and the works that are therein shall be burned up.

11 Seeing then that all these things shall be dissolved, what manner of persons ought ye to be in all holy conversation and godliness,

12 Looking for and hasting unto the coming of the day of God, wherein the heavens being on fire shall be dissolved, and the elements shall melt with fervent heat?