The following is part 2 of our series on the 1950 Publication HYVÄ SANOMA (Good Tidings), originally written in Finnish and now translated into English. 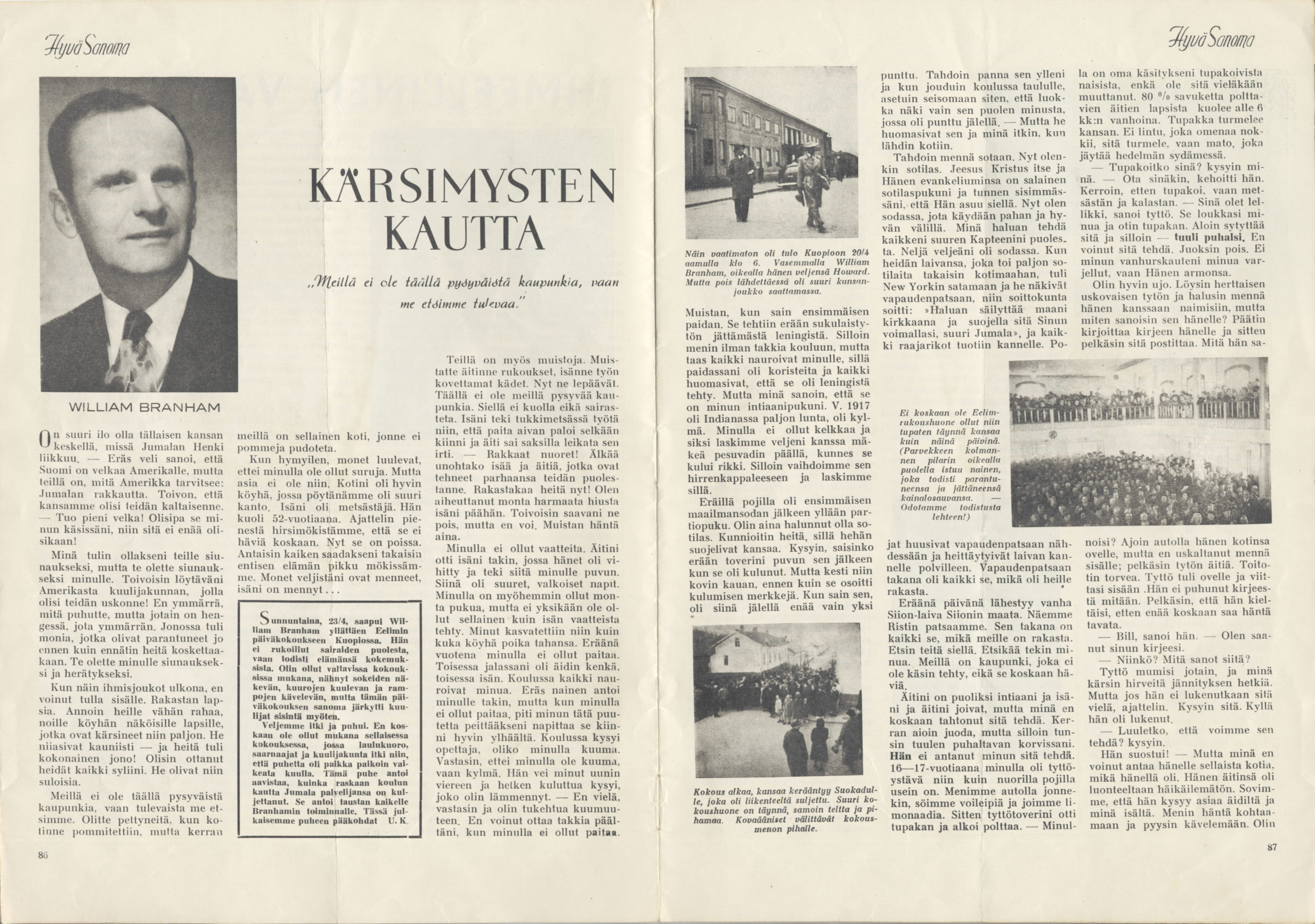 “We have not a continuing city here, but we’re in a search of the future.”

On Sunday April the 23rd, William Branham came without a notice to the daytime meeting of Eelim in Kuopio. He did not pray for the sick, but testified of the happenings of his life. I have been in wonderful meetings, seen the blind get their sight, the deaf hear and the lame walk, but the message of this meeting shocked the audience into our innermost.

Our brother wept and talked. I have never been in such a meeting where the choir, ministers and the audience wept so that at some points it was hard to hear the speech. This speech gave an idea of the hard school that God has brought his servant through. It gave a background to all the operation of Branham. Here we are publishing the highlights of the speech.

It is a great joy to be in the midst of a nation where the Spirit of God is moving. A brother told me that Finland is in debt to America, but you have what America needs: the love of God. I wish that our nation was like yours. That little debt! I wish it (the debt) was in my hands and it would not exist anymore!

When I saw the crowds outside I could not come inside. I love children. I gave them some money to those poor looking children that had suffered so much. They curtseyed beautifully, and then there was a line of them! I wanted to hold each one of them in my arms. They were so sweet.

We have no continuing city here but we are in search of the future. You were saddened when your homes were bombed, but we will one day have a home where no bombs will be dropped. When I smile, many people think that I have not had any sorrows. But that is not the case. My home was very poor, and our table was a big stump. My father was a hunter. He died at the age of 52. I thought of our little log cabin, that it would be there forever. Now it is gone. I would give everything to get back the life in our little cabin. Many of my brothers are gone, my father is gone…

You also have memories. You remember your mother’s prayers, your father’s hands that were hardened of work. Now they are at rest. Here we have no continuing city. There will be no dying or sickness. My father laboured so hard that his shirt sunburned to his back and my mother had to cut it off with scissor. Dear young people! Do not forget father and mother, who have done their best for you. Love them now! I have caused many grey hairs into my father’s head. I wish I could take them away, but I can’t. I will always remember him.

I did not have clothes. My mother took my father’s suit in which he was married and made a suit for me out of it. It had big white buttons. Later on I have had many suits, but none of them has been like the one made out of my father’s clothes. I was raised as any other poor boy. One year I did not have a shirt. On one foot I had my mother’s shoe and on the other my father’s. In school everybody laughed at me. A lady gave me a jacket, but because I did not have a shirt. I had to button it up very high in order to hide this. In school the teacher asked if I was hot. I said I was not hot, but cold. She took me by the stove and after a while asked if I was warmed up. Not yet, I said, and nearly suffocated with the heat. I could not take the coat off since I didn’t have a shirt on. 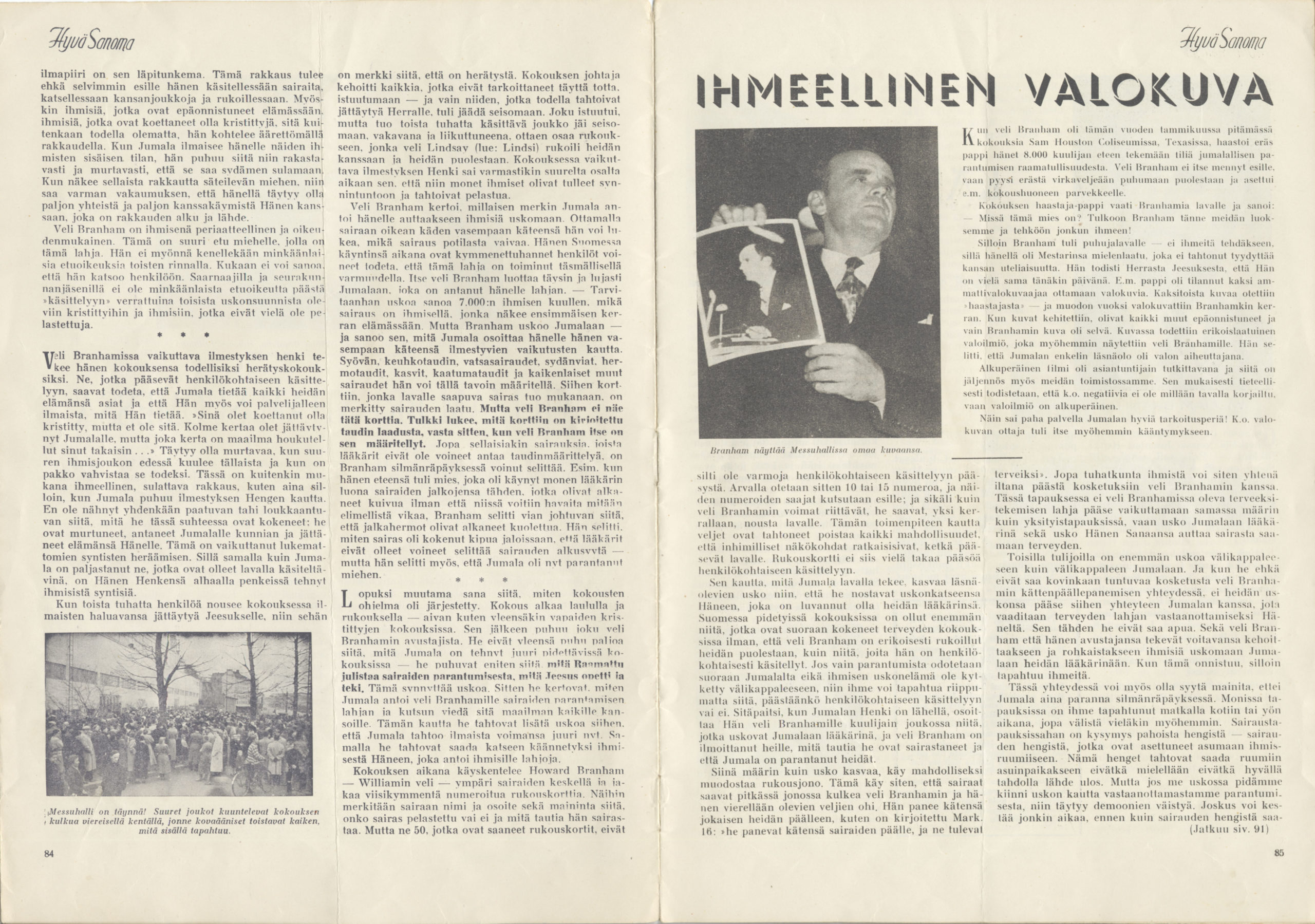 The text next to the picture on page 85 –
AMAZING PHOTOGRAPH: PILLAR OF FIRE

When Brother Branham was having meetings at the Sam Houston Coliseum, Texas, in January of this year, a priest challenged him to come before the audience of 8,000 people to give an account of the Divine Healing being Scriptural. Brother Branham himself did not go, but asked a colleague of his to speak for him, and he went to the balcony of this meeting place.

This challenger priest demanded Branham to get on stage and said, “Where is this man? Let Branham come to us and do a miracle!”

Then Branham stepped on the platform not to perform a miracle, since he had the nature of his Master, who did not want to satisfy the curiousness of the people. He testified on the Lord Jesus and that He is still the same today. The priest mentioned earlier had ordered two professional photographers to take pictures. Twelve pictures were taken of the challenger, and to be formal, one picture was taken of Brother Branham as well. When the photographs were developed, all the other pictures were ruined, and only the picture of Branham was clear. In the picture was seen a peculiar optical phenomenon that was later shown to Brother Branham. He explained that the presence of the Angel of God caused the light.

The original film was examined by professionals and there is also a copy in our office. According to that, it is scientifically proven that this negative had in no ways been retouched, but that the light was original.

This is how the evil got to serve the good intentions of God! This photographer converted later on.

We will post part 3 from the magazine – about the war orphan, and the eight-year-old cross-eyed girl, and many more testimonies.