The following is part 3 of our series on the 1950 Publication HYVÄ SANOMA (Good Tidings), originally written in Finnish and now translated into English.

“He bore our sicknesses”

Eleven-year-old war orphan Veera Ihalainen from Leppävirta experienced a wonderful healing. She had been in a county hospital and children’s hospital suffering from an illness called “legg-perthes” in her hip, and she was not able to walk without crutches. In addition she had an artificial leg that weighted 1.6kg (3.5lbs), supported with iron and leather straps so she could only move by swinging her body. She came to the meeting with her nurse. At the front door she saw Brother Branham coming in and grabbed his clothes with her child’s faith. Branham did not have his interpreter with him, so he was not able to say anything to her even though he would have wanted.

Veera was able get inside and when the prayer line was formed, she too went with her nurse to pass by Branham. Then Branham remembered the incident at the front door and told the girl to take off the prosthesis and leave the crutches. Veera sat on a chair and quickly the straps of the prosthesis were opened. After a little while she walked to the stage carrying the heavy prosthesis and crying aloud with joy. Then Branham told that she had been healed already outside when she touched him, even though he was not able to tell her that then. You can imagine how the audience rejoiced and thanked the Lord.

Veera was advised to go back to the audience, but she started to climb up to the platform on the narrow and steep steps. But there were so many people that they blocked her way, and so she had to go back down the same way. Earlier she had not been even able to walk without the prosthesis. Veera’s nurse was deeply touched by the work of the Lord on the little girl. Later on Veera got a chance to testify to the audience that Jesus had healed her and many pictures were taken of her. A few weeks after this, Veera’s mother had written to her friends that Veera was playing and running outside like all the other children. 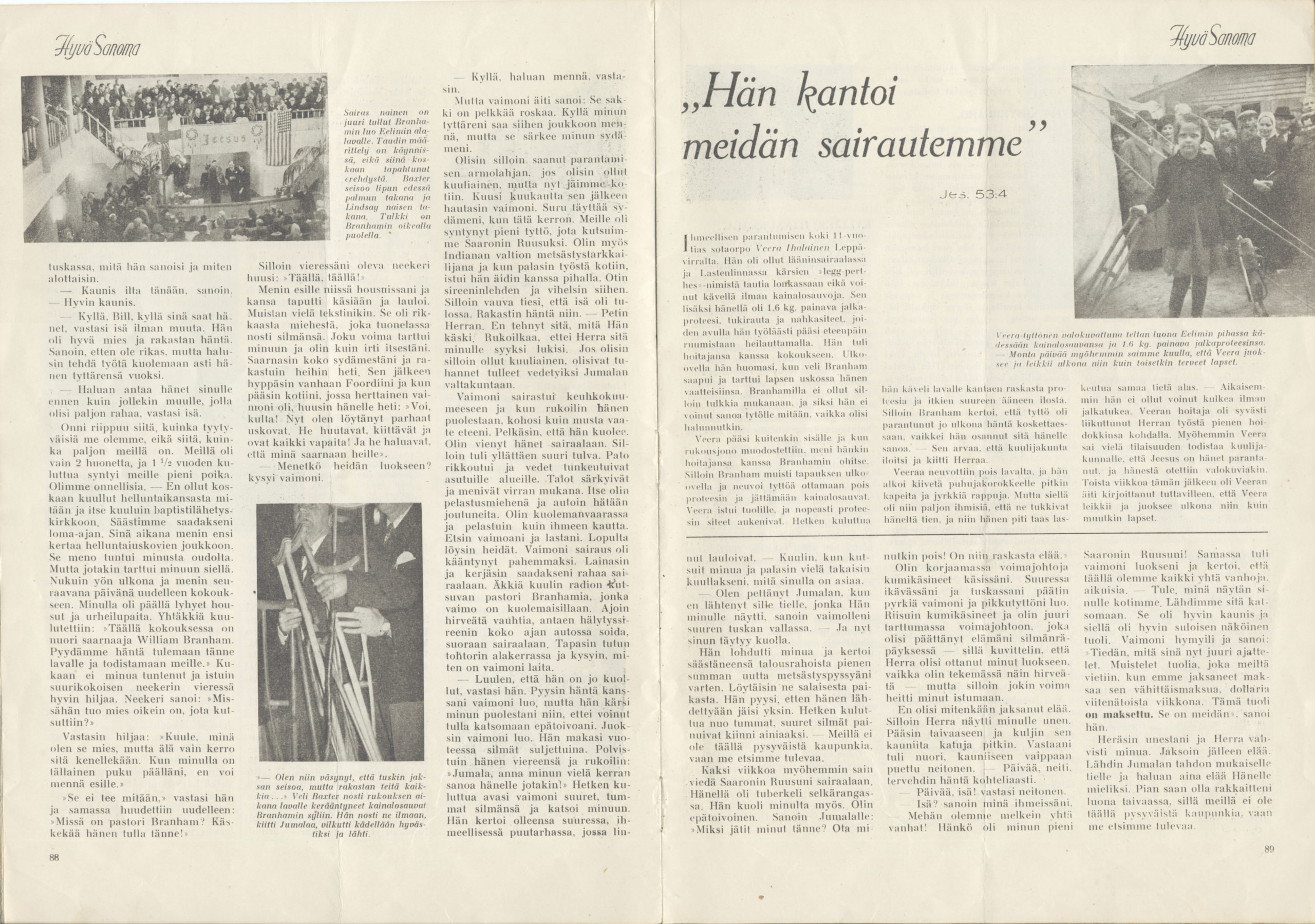 The text below is for the photo on page 89:
Little Veera Ihalainen in a photo by the tent at the yard of Eelim with her crutches and the 3.5 lbs artificial leg in her hand. Several days later we got to hear that Veera is running and playing outside as all the other healthy children doa.

From Lapinlahti was badly cross-eyed. Though she’s not yet old, only 8 years, her eyes have been crossed from her childhood. Laina’s parents are Christian. When she was 2 years old, the doctor gave her glasses to help with the cross, but they didn’t help. The white of the eye had badly pushed the pupil as the case often is with severe cases of squints. On Saturday she was in the prayer line and the eyes started to straighten out immediately. The next day we took a picture of her. The sun was shining straight in her eyes, but you can see from the picture, already the next day her eyes were almost straight. Already then she was a completely a different girl than before. You can guess that she was happy and grateful. She also told that her brother, Olavi, who was deaf from his ear (right ear), had received his hearing the same day. We did not have a chance to meet him.

From Tampere, told that she had been in a car accident over 10 years ago. Because of it she broke her hip and rheumatism struck the broken place. She used two crutches for walking also at home. The doctors had instructed her not to walk without crutches and earlier had proposed an operation, but even them were too late. Her leg would have remained stiff. The sister was disappointed. She was given a prayer card, but did not get to go to the platform to see Branham. Saturday night she went into the prayer line in Kuopio. Branham took her by the hand and saw her well, taking the crutches off. The sister wanted to have the crutch back, but Branham assured that she wouldn’t need them. The following day this sister had walked at least 3 kilometres and had not even been tired. She briskly walked to the platform in Eelim in front of everybody, happily affirming that she experienced a great miracle, and hundreds of friends in Tampere can testify that.

From Pirttikylä, a 17 year-old-girl has been born again for only 2 months. A local preacher took her to Helsinki on his expense. On April 26th she was in the meeting, helped by two people to walk her, when she was suffering from difficult nerve cramps that recurred up to 20 times a day and especially when she was with other people. During the seizures her head was pulling back and she bit her teeth together like in epileptic seizures. When the prayer line was formed, she was there with help from others. She saw how crutches and sticks were lifted up to the platform and the Lord gave her faith. If those who are crippled and infirm get healed, wouldn’t the Lord heal me as well! She believed and when Branham touched her, she experienced the miracle of healing. She got out of the Messuhalli without anyone helping her, and the following day, she was walking in the city like any other person. We saw her the following night at the meeting in Messuhalli, and she told us that she felt like being in another world.

For the glory of my Jesus I want to testify of His healing power.

In October 1948 (I was 22 years old) after my baby was born, I got sick with a difficult gynaecological disease (so-called inflamed ovarian, salpingo-oophoritis et parameterises posterior). I was treated by many different doctors and got periodic relief, but I always felt the pain at times very strongly. Several doctors, including professor Rauramo, said that my disease was incurable.

In spite of these statements, I trusted the Lord’s healing power and that He wouldn’t let hope make ashamed, but answer my prayers.

In the meetings of Brother Branham in Kuopio, I was in the prayer line, and when the brother laid his hands upon me, I felt the power of the Lord going through me. And instantly I felt I was healed. Thank you Jesus!

Less than a month after, two doctors checked me and stated that my organs are perfectly healthy and gave me a report of it.

Jesus truly lives and is still working among His people. Blessed be the name of the Lord!”

The editor has a medical certificate given by Doctor Marja Ylänkö on May 15th, 1950 of the found illnesses of Mrs. Bergström, that now she has fully recovered from them. Also the county doctor Weli Ylänkö has reached the same conclusions.

She has been using glasses for 17 years and very strong glasses for 4.5 years. At the time, she had ordered a pair of glasses from abroad. In one of her eyes the sight is weaker, and a difficult migraine had forced her to leave her job in the Asikkala municipal office in January 1946. She had visited Doctor Mäkelä at the Red Cross and Doctor Jokivartio had stated that the pain that went on day and night had strained the third nerve so that it started to paralyse. If she had gotten an infection into her eye, they would have performed an operation that would have paralysed her face. The doctors were unable to do anything to her eyes.

On Saturday Sister Hannukkala sat on the front seat and had gotten a prayer card to get to go to Branham on the stage. Branham said that she had illness in her eyes and nerves and asked her to take her glasses off. And when she did that, light didn’t hurt her like it used to do. In the evening she could not yet read but she started to pray. In the night around 2:30 an electric current went through her body and she started to praise the Lord in new tongues. In the morning she started to read and everything began to clear out. She could read well and the headache was gone. It used to be troublesome for the sister to function while her glasses were being fixed. Now she does not need them anymore. You can guess how happy she is. Now neither her eyes nor her head hurts and she’s able to go back to work. The sister says that as her faith gets stronger, so is her health improving. 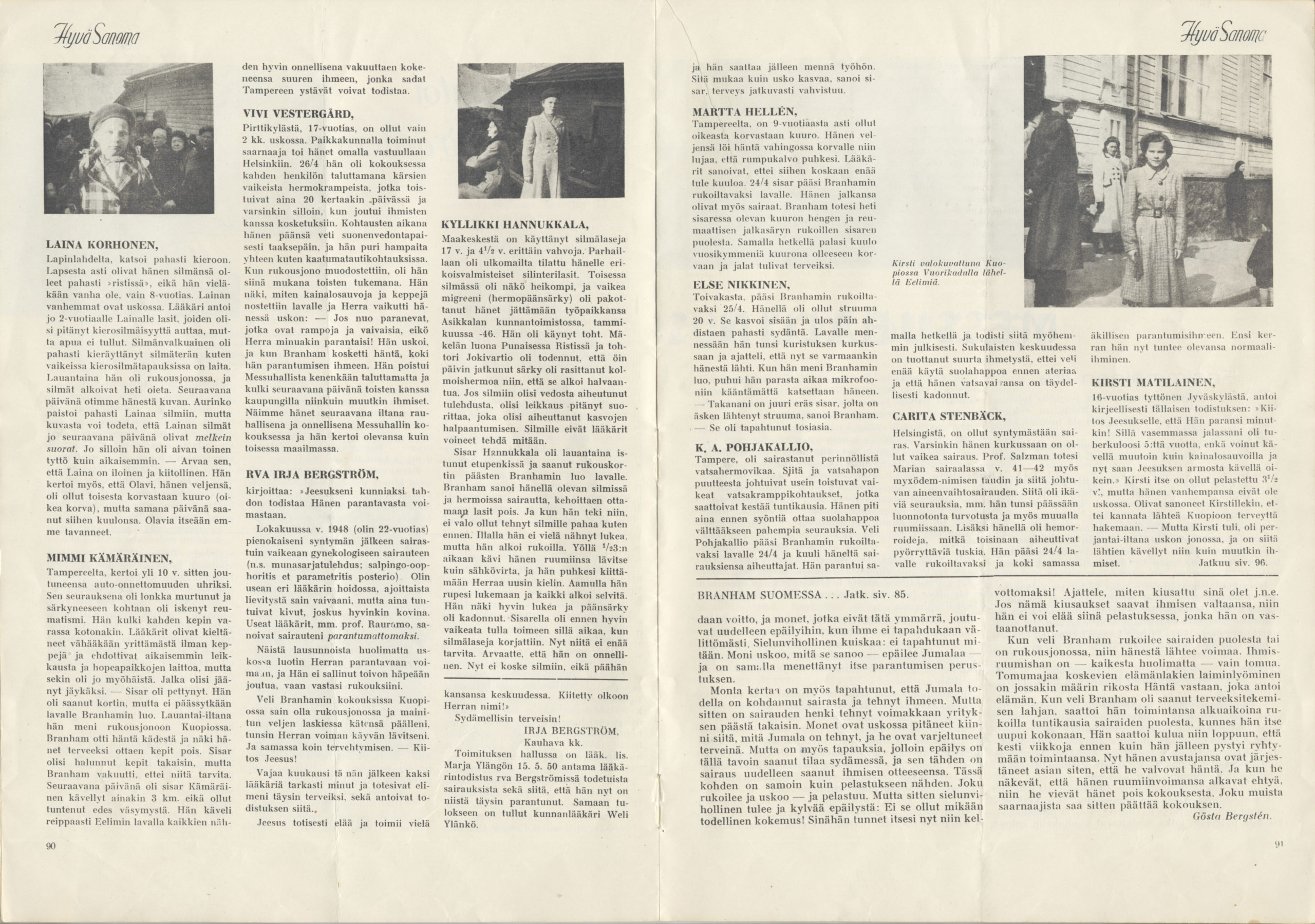 She has been deaf from her right ear since she was 9 years old. Her brother accidentally hit her ear so hard that her eardrum burst. The doctors said that she would never hear with that ear again. On April 24th this sister got to be prayed for by Branham. Also her legs were ill. Immediately Branham noticed the deaf spirit and the rheumatic leg ache while he was praying for the sister. At the same time, the hearing came back to her ear that had been deaf for decades and her legs were healed.

She got be prayed for on April 25th. She had had goitre for 20 years. It was growing in and out, pressing the heart badly. When going on the stage, she felt a strangle in her throat and thought that now it must have left her. When she went to Branham, he was talking to the microphone and not turning his head. “Behind me, there’s a sister who just lost a goitre.” It was a true fact.

He had been ill with a hereditary stomach nerve problem. Because of that and lack of stomach acids, he got frequent cramps that may last for hours. Before eating he always had to take salt acid to avoid worse consequences. Brother Pohjakallio got to be prayed for on the stage on April 24th and heard from Branham the causes to his diseases. He got healed at the same instance and publicly testified of it later. Among his relatives there has been great wonder since the brother does not use salt acid before meals anymore and that his stomach problems have gone away completely.

She has been ill since her birth. Especially in her throat has been a difficult illness. Professor Salzman discovered in years 41-42 at the Maria hospital also an illness called hypothyroidism and metabolism problems caused by it. It caused unfortunate side effects such as unnatural swelling in her head and elsewhere. She also had hemorrhoids that occasionally caused dizzying pains. She got on the stage on April 24th and immediately experienced an instant healing miracle. For the first time, she feels like a normal person. Kirsti Matilainen,

A 16-year-old girl from Jyväskylä gave this testimony through a letter:

“Praise Jesus, for healing me as well! I had tuberculosis in my left leg for 5 years, and I was not able to walk without crutches. Now for the grace of Jesus I can walk properly.”

Kirsti herself has been saved for 3.5 years but her parents are not. They had told Kirsti that it’s not worthwhile to go to Kuopio seeking for health. But Kirsti came, and she was in the line of faith on Friday, and has walked since then like everybody else.

We will post part 4 from the magazine – with Brother Ern Baxter’s introduction and how the people should prepare for the meetings.