The following is part 6 of our series on the 1950 Publication HYVÄ SANOMA (Good Tidings), originally written in Finnish and now translated into English. 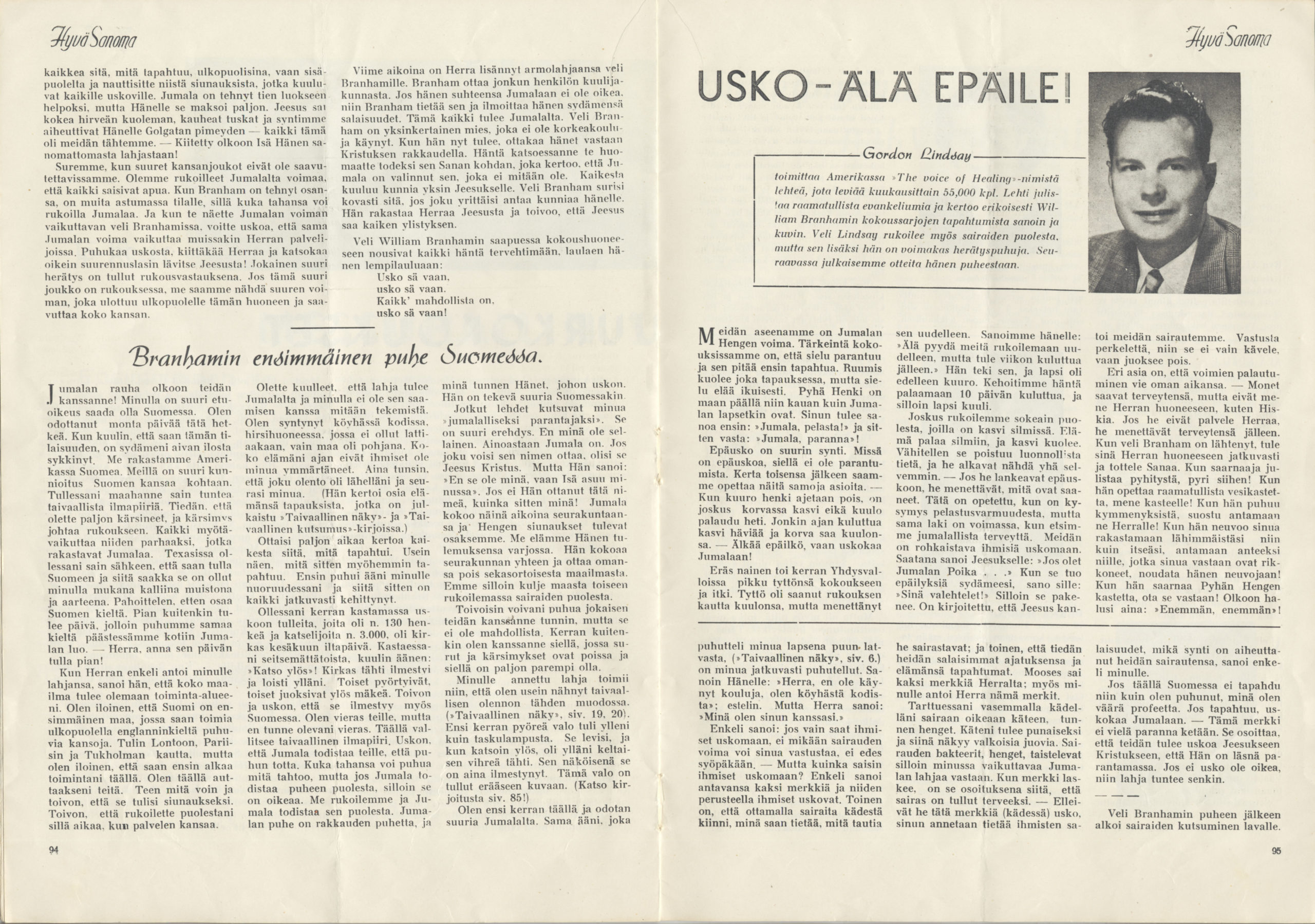 HAVE FAITH – DO NOT DOUBT!

Publishes a magazine in America called “The Voice Of Healing”, and it is being distributed monthly by 55,000 copies. The paper proclaims biblical Gospel and specially tells about the event of the meetings of William Branham in words and pictures. Also Brother Lindsay prays for the sick but in addition he is also a strong revival speaker. Below are parts from his speech.

Our weapon is the power of God’s Spirit. The most important thing in our meetings is that the soul gets healed and it needs to happen first. The body dies anyway but the soul lives forever. The Holy Spirit is on earth as long as God’s children are. You need to say first, “God, save me!” and only after that, “God, heal me!”

The greatest sin is unbelief. Where there is unbelief there is no healing. Time after time we have to teach these same things. When a deaf spirit is cast out, there might be a tumour in the ear and the hearing does not come back immediately. After a little while the tumour disappears and the ear gets its hearing. Do not doubt, but have faith in God! A lady in United States brought once her little girl into a meeting and cried. The girl had received her hearing through prayer but lost it again. We told her, “Don’t ask us to prayer for her again, but come back after one week.” She did that and the child was still deaf. We asked her to come back in 10 days, and then the child could hear.

Sometimes we pray for sick people who have a tumour in their eyes. Life comes back to the eyes and the tumour dies. Gradually it gets out of the body naturally, and they start to see more clearly. If they fall into unbelief they lose what they have received. This has been taught when it’s been about eternal security, but it’s the same thing when we are seeking for divine healing. We need to encourage people to believe. Satan said to Jesus, “If Thou art the Son of God…” When it brings doubt into your heart, tell it, “You’re lying!” Then it will flee. It is written that Jesus bore our sicknesses. Resist the devil and it will not only walk, but run away.

It is a different thing to get back the strength; it takes its own time. Many people receive their healing but do not go to the house of the Lord like Hezekiah. If they don’t serve the Lord they’ll lose their health again. When Brother Branham has left, come to the house of the Lord constantly and obey the Word. When the preacher preaches on sanctification, aim to that! When he teaches on biblical water baptising, go and get baptised! When he talks about tithes, agree to give them to the Lord! When he advises you to love your neighbour as yourself, to forgive to those that have trespassed against you, follow his advice! When he preaches on the baptism of the Holy Ghost, receive it! May your desire always be, “More, more!” Always walk in the honeymoon experience with your Lord! Then you shall prosper; stay healthy as your soul prospers as well.

The ministry of Branham and the gifts he has received shadow the gifts of the others. But when we, common men pray for the sick and the Lord heals through us as well, it encourages all of you to pray more for the sick. Don’t think that some diseases would be harder for God to heal than others. Come with faith! You have prayed many times yourselves. Don’t do that anymore but accept your health! You cannot pray and accept at the same time.

Brother Lindsay prayed for many deaf-mutes with great courage. Usually he took first a child, put his fingers in to their ears and cast out the deaf spirit, and it didn’t happen by asking politely, but commanding. First our brother asked from the mother of the child if they believe, and if not, he asked if she would like to give her life to the Lord. After receiving an affirmative answer he prayed.

I often followed these prayer occasions from close by. Brother Moore would assist Brother Lindsay in them. Once in the middle of Lindsay’s prayer, a little boy put his hands on his ears. Then Moore grabbed Lindsay on his arm and interrupted the prayer to show that the help had already come. I saw this myself.

There were several of these kinds of incidents. After the prayer, we tested if the hearing was back. It was done so that hands were being clapped behind the back, even as far as four meters away. One deaf-mute lady nodded every time the hands were being clapped. One girl was tested so that her name was asked behind her back. “Sinikka,” she replied. The brothers tested several that were being prayed for. Some repeated words in English and so on.

But there were also those who did not receive their hearing. This did not discourage Brother Lindsay. When there was a lady who shook her head after the prayer, Brother Lindsay put her aside and told to the audience, “I want you to know that this is the problem with people who have been believers for years. They have learned that God does not heal. When they see that younger get healed they come and try it. But they need to believe that the Lord will heal them. Teach them in this matter, testify to them on faith. Then we will get results.

A 10-year-old schoolboy from Kuopio went deaf in one ear after a friend hit him with a rock in the forehead. This happened when he was 3 years old. A big lump appeared in his forehead and his face swelled. The doctor told them that the rock damaged the brain. Doctor Marttinen tried to pump the ear open, without succeeding in it and said that the case was hopeless. Also Doctors Meurman and Hämäläinen said that they could not help him. When Pekka got a cough, also the healthy ear got infected.

Pekka was prayed by Gordon Lindsay, and he got the life back into his deaf ear. That has been testified and tried by his parents and outsiders. 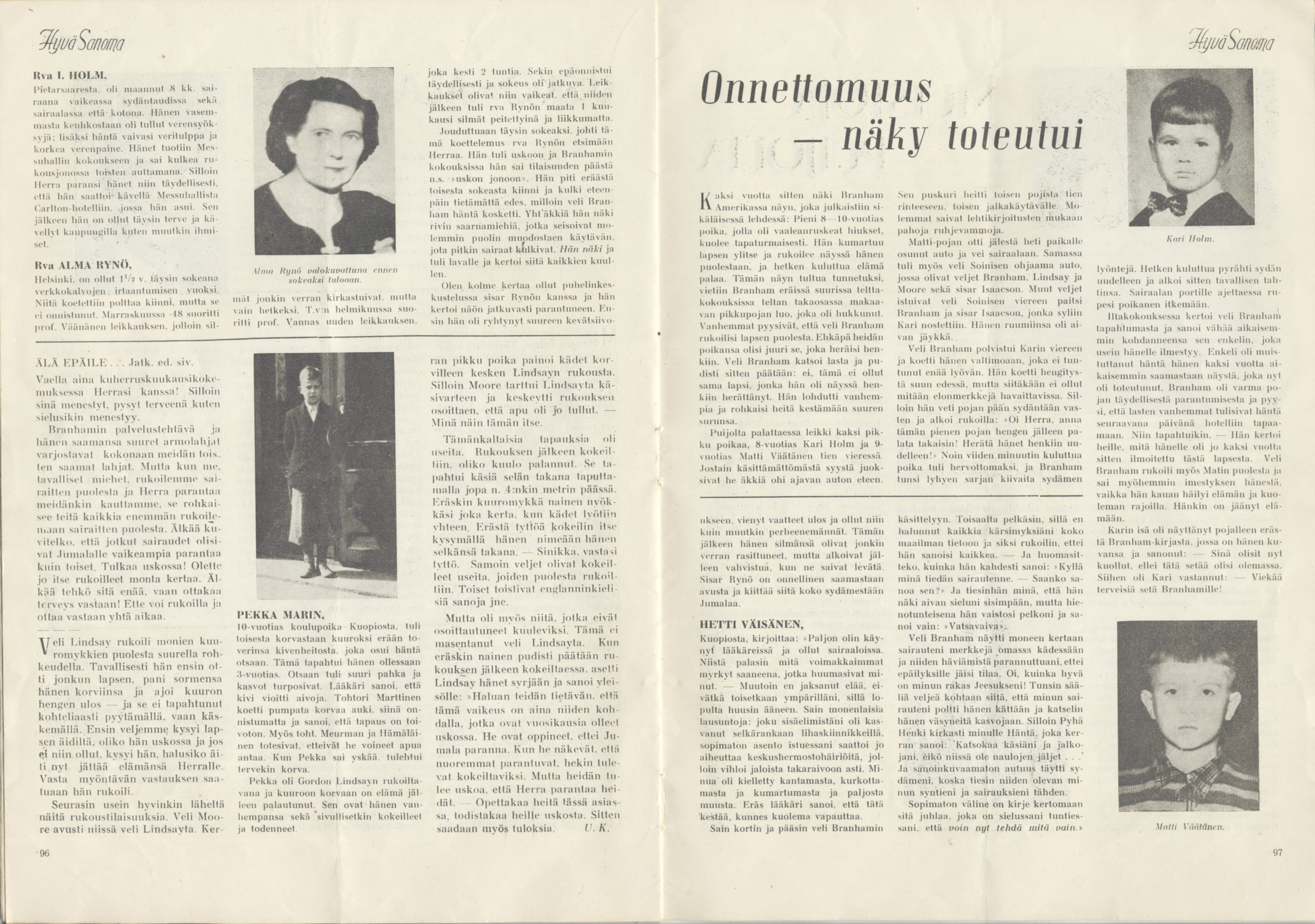 Text below picture pg. 96:
Alma Rynö photographed before she got blind.

From Pietarsaari had been laying sick for 8 months with a difficult heart condition, both in the hospital and at home. She had had blood rushes from her left lung; she also had blood clots and high blood pressure. She was brought into the Messuhalli meeting and she was in the prayer line with a help of others. The Lord healed her then so completely that she was able to walk from Messuhalli to Carlton Hotel where she was staying. After that she has been perfectly healthy and walked in the city like everyone else.

She has been completely blind for 18 months because her retinas had come loose. They were attempted to be burnt back, but it did not work. In November 1948 Professor Väänänen operated a surgery, and as a result, the eyes cleared out a little bit but only for a moment. In February of this year, Professor Vannas operated another surgery that lasted two hours. Even that failed completely and the blindness was permanent. The surgeries were so difficult that after them Mrs. Rynö had to lie still in bed one month with her eyes covered. After being completely blinded, the trial caused her to seek for the Lord. She came to the Lord and in the meetings of Branham, she got a chance to be in the so called line of faith. She was holding onto another blind person and walked forward without even knowing when Brother Branham touched her. Suddenly she saw a line of preachers who stood on both sides forming a corridor, which the sick walked through. She saw and came to the platform and told about it in front of everybody. I have talked on the phone three times with Sister Rynö and she told me that her sight is getting better all the time. First she had started a great spring cleaning, took the clothes outside and been like all the other housewives. After this her eyes were somewhat strained but started to get stronger when rested. Sister Rynö is happy for the help she received and thanks God with all her heart for it.

I had seen many doctors and been in many hospitals. I came back from them with the most toxic poisons in me. Otherwise I didn’t have strength to live, nor the others around me, for in the end I was screaming out loud. I got many kinds of statements: one of my internal organs had grown into my spine with muscle ties. If sitting improperly it might have caused some central nervous system failures, and then I felt pain from my feet to the back of my head. I had been told not to carry, reach out, bow and many other things. One doctor told me that this would go on until death would set me free. I got a card to meet with Brother Branham. On the other hand I was afraid, since I didn’t want everybody to know all my sufferings. And that is why I prayed, that he would not say everything. And did you notice how he said twice, “Yes, I know your illness. May I say it?” And I knew that he saw right into the deepest of my soul, but being considerate, he felt my fear and said only, “Stomach problem.”

Brother Branham showed me several times the signs of my illness in his hand and it disappearing after I got healed, so that there would not be any room for doubt. Oh, how good my Jesus is! I felt pity for the brother since my illness was burning his hand and I looked at his tired face. Then the Holy Spirit clarified Him to me Who once said, “Look at my hands and feet, don’t they have the marks of the nails…” An indescribable bliss filled my heart since I knew they were because of my sins and sickness.

A letter is an unworthy vessel to tell about the feast that is in my soul when I feel that I can now do anything.”