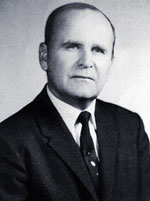 God's prophet for this age.

William Marrion Branham was born on April 6, 1909, in a wattle and daub cabin, in Berksville - Kentucky and lived most of his life in Jeffersonville - Indiana, in the United States of America.

At the age of twenty-two he married Hope Brumbach, with whom he had two children, Billy Paul and Sharon Rose Branham. During the 1937 flood on the Ohio River, he lost his young wife and little daughter. After living a few years as a widower, he remarried, on October 23, 1941, Meda Broy, whom he references, preaching at the opening of the Sixth Seal: "And even though I liked her so much, I wouldn't have gotten married with her if God hadn't told her to do it..." Meda Branham gave her three children: Rebeck, Sara, and Joseph Branham.

William Branham's supernatural ministry fulfilled the prophecy of Malachi 4:5-6. And his message is the revelation that makes manifest the secrets of God. He, without a shadow of a doubt, was the prophet sent from God to this age and preached the message that God commanded him to bring the predestined back to the original Word.

If you want to get to know him better please download and read his messages from the list below, and read the booklets: The Twentieth Century Prophet and Back to the Original Word. Discover the official website of Voice of God - USA by clicking here.

Watch the prophet movies at:

See various pictures of the Prophet with his family, friends, in the Tabernacle, hunting and fishing, his ministry and various places. GALLERY

BOOKLETS ON THE MESSAGE AND SUPERNATURAL LIFE, AND THE MESSAGES PREACHED BY THE PROPHET WILLIAM MARRION BRANHAM

Check the Messages Preached and Books in English by Prophet William Marrion Branham in Alphabetical Order by clicking here.

Below you can check the Messages preached per year: