That great monster laying up yonder, that flipped hisself over in Alaska, a few days ago, threw its tail up again this morning, along about, down around in Washington. He could head this way, mighty easy.

The “great monster” Brother Branham was referring to in the previous quote produced one of the most powerful earthquakes ever recorded. The 9.2 temblor hit Anchorage Alaska on Good Friday, March 27, 1964. Just before the quake, Brother Branham was in a remote area near Klondyke, Arizona when a whirlwind came down in front of a number of hunters in his camp, ripping off the tops of the trees and tearing rocks out of the side of the canyon. Afterwards, Brother Branham made the statement, “Judgment is striking the West Coast.” The prophecy came to pass when the earthquake struck Alaska two days later. 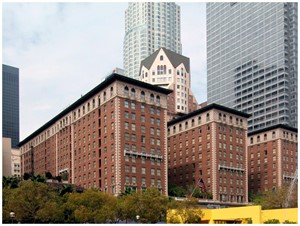 On April 29, 1965 Brother Branham was in Los Angeles, preaching “The Choosing Of A Bride” at the Biltmore Hotel. At the beginning of the service, he mentions the monster that produced the Alaskan Earthquake “threw its tail up again this morning, down around in Washington.” He was referring to the 1965 Puget Sound Earthquake, near Seattle. Science measured it at a magnitude 6.7.

Then later in that sermon, Brother Branham makes this famous prophecy,

“Thou city, who claims to be the city of the Angels, who has exalted yourself into heaven, and sent all the dirty, filthy things of fashions and things, till even the foreign countries come here to pick up our filth and send it away, to your fine churches and steeples, and so forth, the way you do. Remember, one day you’ll be laying in the bottom of the sea, your great honeycomb under you right now. The wrath of God is belching right beneath you. How much longer He will hold this sandbar hanging out over that? When, that ocean out yonder, a mile deep, will slide in there, plumb back to the Salton Sea. It’ll be worse than the last day of Pompeii. Repent, Los Angeles.”

The wrath of God is belching right beneath you

When he described “the monster,” he made mention of Alaska, Washington, and of course, Los Angeles. What science did not know back then was that these three areas have some important similarities. 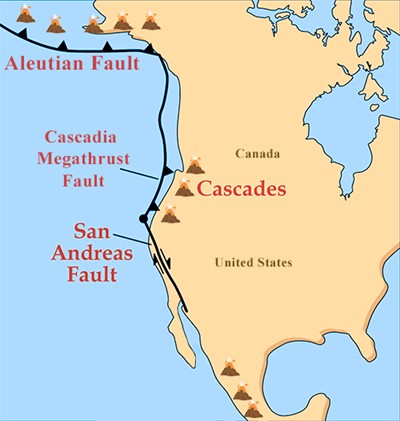 People have known about the dangers of the San Andreas fault for generations. In 1906, it produced a magnitude 7.9 quake that destroyed the city of San Francisco (just days after the Azusa Street Revival started), and scientists say that it has the capability to produce a much larger quake than that.

The San Andreas runs from the Baja of California in western Mexico, up through the entire west coast of California, then off into the Pacific Ocean in the far-north region of California. The Cascadia fault is located off the coast of northern California, running north along the West Coast, past Vancouver Island in British Columbia, Canada. This is the fault that Geologists say caused some of the biggest earthquakes in North American prehistoric times. And then there is the massive Aleutian fault just off the coast of Alaska that caused the 1964 Alaskan Earthquake.

All are very dangerous in themselves, but science is now beginning to understand what the prophet called the “great monster” way back in 1965: these faults are connected.

these faults are connected

Newsweek Magazine published an article on Dec. 19, 2019 that said the following: (speaking of the Cascadia fault system off the coast of Washington)

According to the Canadian government, there have been 13 megathrust earthquakes at the subduction zone in the last 6,000 years. “Some have been as close together as 200 years and some have been as far apart as 800 years. The last one was 300 years ago.”… earthquakes at Cascadia can trigger earthquakes at the northern end of San Andreas… this happened at least eight times over 2,800 years… This evidence has forced us to conclude, as we did earlier, that these two great faults are interacting, one triggering the other, spaced closely in time. The evidence clearly points to Cascadia first, then some short time later, the San Andreas goes.

The article makes the following conclusion.

It means that the almost incalculable damage that will take place from the next earthquake on either fault, could include both…

Remember, the prophet told us while speaking in Los Angeles, “That great monster laying up yonder, that flipped hisself over in Alaska, a few days ago, threw its tail up again this morning, along about, down around in Washington. He could head this way, mighty easy.”

Even more ominous than these recent findings is what geologists are now saying about how often these faults have a major rupture. It is almost a consensus that the faults on the West Coast are overdue for a massive earthquake, both along the San Andreas, and up into Cascadia. It could happen any day.

It could happen any day

So often, we overlook the magnitude of the prophets’ words. The simple fact that Brother Branham included Alaska, Washington, and California in referring to the “great monster” shows that he had a far greater revelation than the most respected scientists of his time. Fifty years ago, they would have laughed at what he said. Today, they are finding that it is the truth.

Science changes, but God’s Word stays the same. Brother Branham said, “It’ll be worse than the last day of Pompeii. Repent, Los Angeles.” And those words will soon come to pass.

Since that earthquake, there is a two- or three-inch crack that come in the earth, starting in Alaska, goes around through the Aleutian Islands, comes out about a hundred and fifty or two hundred miles in the sea, comes back up at San Diego; takes in California, or Los Angeles, and comes out again just below the northern part of California there, a little place called San Jose, just below there.

And this scientist was speaking, being on an interview. We was watching on television. And he said, “Beneath that is just a churning lava.” And he said this, he said, “That is a chunk will break loose,” and said, “and it will.” And this inter-…

The man, scientist interviewing this chief scientist, said to him, said, “Well, that could then all sink?”

Said, “Well, course, will probably be many, many years from now.”

But just as I sure was standing there under that Inspiration, put judgment on that West Coast, and then followed it right up here with the sinking of Los Angeles, she is gone! That’s right. It will happen. When? I don’t know.